Anyone who knows me will tell you that I’m one of the biggest Darksiders fans around, so it’ll come as no surprise when I tell you I’ve been building Darksiders 3 up in my head ever since it was first announced. I love this series more than any other so you can trust me when I say the latest release has left me nothing but underwhelmed and disappointed.

Straight from the off Darksiders 3 sets a bad impression. The opening scene is pretty shocking to be honest, as you set off after the first of the Seven Sins as new protagonist Fury, the kickass female horseman with aspirations to be the leader of the pack. Sadly she’s about all that’s kick ass in a scene which looks like it belongs more on PS3 than PS4. The textures seen here are unforgivable; perhaps we’ve just been spoiled by the likes of God of War, which in comparison is a masterpiece of game design, but even still, first impressions are everything and they aren’t great here. 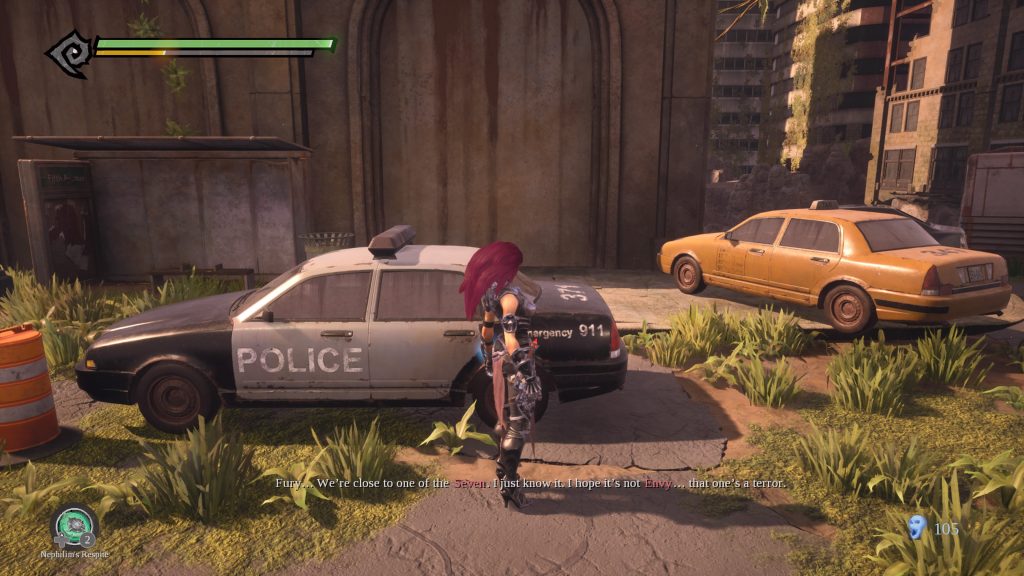 Darksiders 3 isn’t helped by the controls which are nothing short of awkward to begin with. Trying to wrestle with jumping onto platforms when fighting a boss almost immediately isn’t great and while you do get used to the controls eventually, there are other issues which come into play which make getting to the end a chore rather than a great experience.

Someone in their wisdom decided it would be a good idea to follow the Dark Souls route of making the game as difficult as possible while at the same time completely sucking the fun out of the experience. I like a challenge as much as anyone but some serious design flaws mean your stress levels will be through the roof. For instance, if you decide to activate Fury’s special powers or any healing or strength shards, then if you shouldn’t win you’ll find you have lost them when the game restarts at the checkpoint. Add in the fact that you lose your currency too (known as souls), as well as a lot of checkpoints making you pass through areas full of monsters you’ve already defeated in order to get back to the boss, then you’ll find fighting against the Seven Deadly Sins actually gets harder the more times you die. It’s terribly thought out in my opinion.

Even taking into account the issues above, you’ll still need to put up with a game which is riddled with bugs. At least twice during play the sound cut out on my PS4 completely, only to come back again once I quit the game. The game also crashed on me, giving ‘that’ blue screen. To add to this, the framerate is also pretty unstable in places, while the game also has a habit of freezing for a few seconds leading up to fights against larger creatures. I also had an issue with something I needed to advance in the game failing to spawn, only appearing after I restarted, and worse of all, when I bought a regeneration special from Vulgrim, it failed to appear and was also no longer for sale, meaning I had to play the whole game without this important weapon enhancement. Obviously, these flaws have a major bearing on my final score.

All of the above is a shame, because like I say, I’m a huge fan so am therefore hoping both for patches and a rethink of trying to copy games like Dark Souls. I mean let’s face it, if you aren’t going to do it right why not stick to the formula which was already loved by many?

Given the negative approach to my review so far you would think I don’t actually like Darksiders 3, but you would be wrong. Underneath the poor design choices and frankly unforgivable bugs is a pretty special game and one that holds true to the series I love so much. Making an appearance are all my favourite characters and elements such as weapons enhancements, the ability to level up Fury and also some special hidden Hollows, which are used to solve some fantastic puzzles and also aim to help you when it comes to taking care of the wide variety of monsters you’ll face. 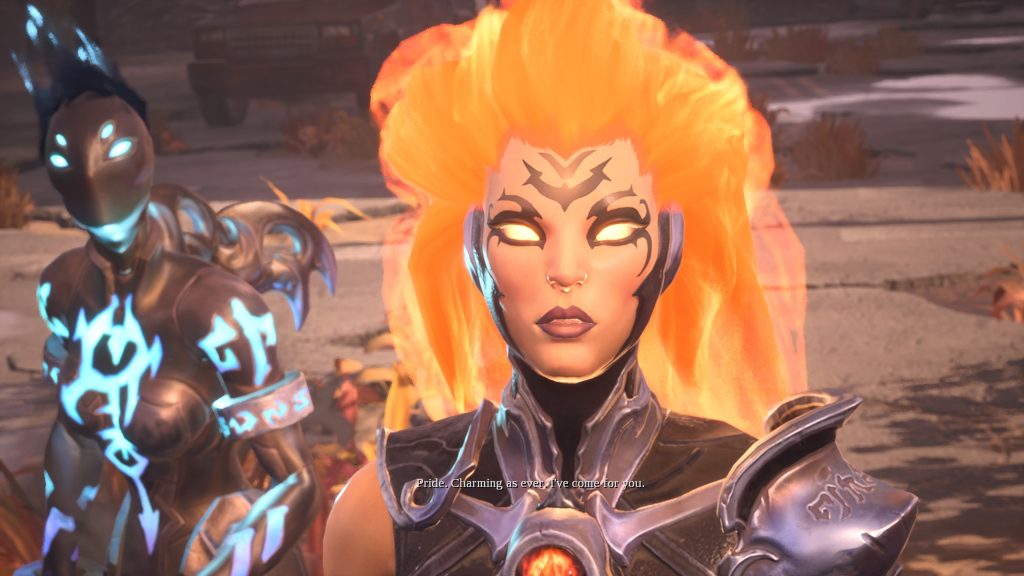 Fury’s attitude seems to be one of thinking of herself, however, you begin to see her softer side the longer the game goes on. Given the game is set at the same time as the original Darksiders, her mission is to restore the balance on Earth, while also trying to make sense of everything that’s happened. To do this she’ll need to take on the Seven Deadly Sins, although as you would expect there are plenty of other surprises along the way.

As mentioned previously, Darksiders 3 is a very tough game, with all enemies providing their own special challenge, some of which are a lot harder to defeat than others. Again my frustrations show as when you die you’ll have to take them all on again and although the developer tells me you can ‘run to every boss, without having to fight any of them,’ I’d sure love to see someone do this without losing half or all of their health. 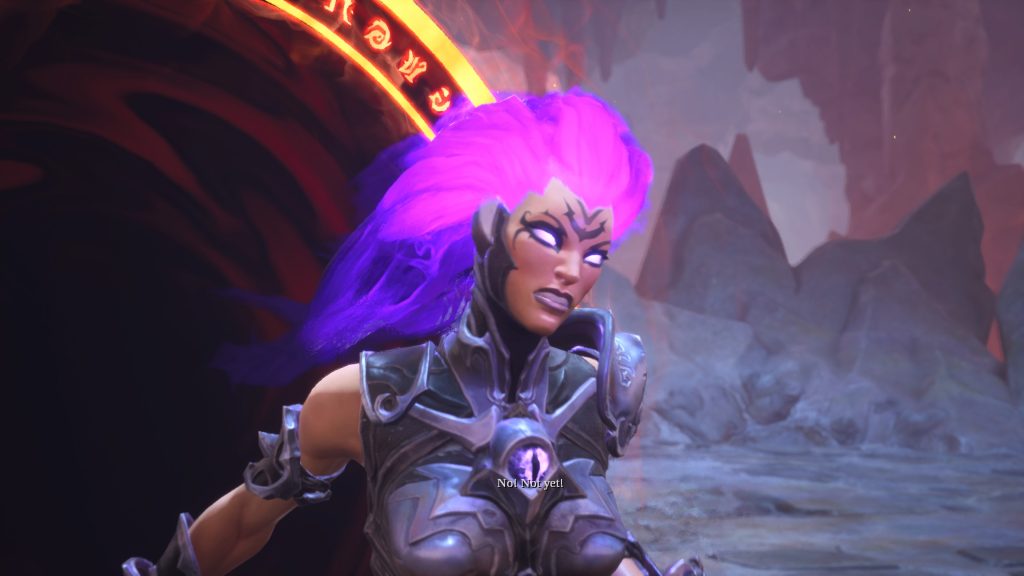 Each area you’ll visit in Darksiders 3 offers a lot of variety, ranging from large caves to underwater caverns, mines and even a ruined city centre, the latter of which gives you access to all the different areas, as well as the ability to visit Uthane, who’ll improve your weapons and enhancements in exchange for any special crystals you’ve found while exploring the caves. Speaking of Uthane, as you play through the game you’ll be looking for humans to rescue at this request, do so and you’ll eventually be rewarded.

There is no doubt the world of Darksiders 3 is well designed, with plenty of hidden areas to find should you wish to explore. The Hollows you’ll unlock also add a lot to the game, with each giving it a different dimension and new way to play. The combat is fun, but just not as free-flowing as it was in the previous games, mainly because you’re mostly concentrating on dodging half the time. I know a lot of people will enjoy this new challenge but for me, it was better when there was less to think about and you could just bash some buttons and enjoy the chaos unfolding in front of your eyes.

I’ve never been so conflicted when reviewing a game before. I do love Darksiders 3 in that it provides everything I could ever want from a Darksiders game, but at the same time the direction the developers have taken in terms of combat is not really for me and while I can put up with this, what I cannot accept is the sheer amount of bugs I have encountered, as well as the previously mentioned design decisions which make fighting against bosses unnecessarily difficult.

Am I still a massive fan of the Darksiders series and do I think Darksiders 3 is a worthy addition? My answer of course is yes, however, I’m more looking forward to Darksiders 4 to see if the developer learns from its mistakes. Perhaps next time they can spend a bit more money on Quality Assurance too. 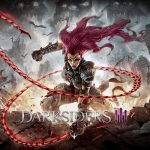