When Henry Stein returns to the Joey Drew Studios where he used to work as a cartoon animator many years prior, he is promised ‘something special’. His old friend and colleague Joey Drew writes to him informing that the studios have continued to create past his departure, so Henry, intrigued by what he may find decides to return.

The Joey Drew Studios have changed drastically since Henry’s last time there. Floorboards have been uprooted, walls have been knocked down to broaden each room and papers filled with frantic sketches are littered across the floors. Deeper exploration reveals hidden rooms, underground levels and, most importantly, a magic Ink Machine, designed to bring animations to life, including the mascot of the studio, Bendy.

The mystery of the Ink Machine and the origins of its creations are only made murkier when demonic creations born from the ink begin to prowl the empty corridors of the studio, armed with sharp teeth and twisted into gross mutations of the beloved Bendy cartoon. Worst of all, Ink Bendy is a silent killer intent on attacking our protagonist. Henry’s visit soon spirals into chaos as he desperately tries to escape the studio all while uncovering the secrets hidden behind the animations.

As a first person horror game Bendy and The Ink Machine uses well-executed jump-scares and the crushing pressure of an eerie atmosphere to uphold tension and unease throughout the adventure. Whilst Ink Bendy is the game’s main adversary his appearances are few and far between which heightens the tension and allows for a blend of stealth, action and combat components which keeps this charming horror game feeling fresh. Henry’s attempts to find freedom lead him to the depths of the studio, to rooms and lower floors that he had no knowledge off, ranging from toy factories, recording studios and a haunted house. Plentiful memorabilia scattered around the studio is at first a comfort, but the toothy smiles of the Bendy cut-outs soon become more menacing then reassuring. 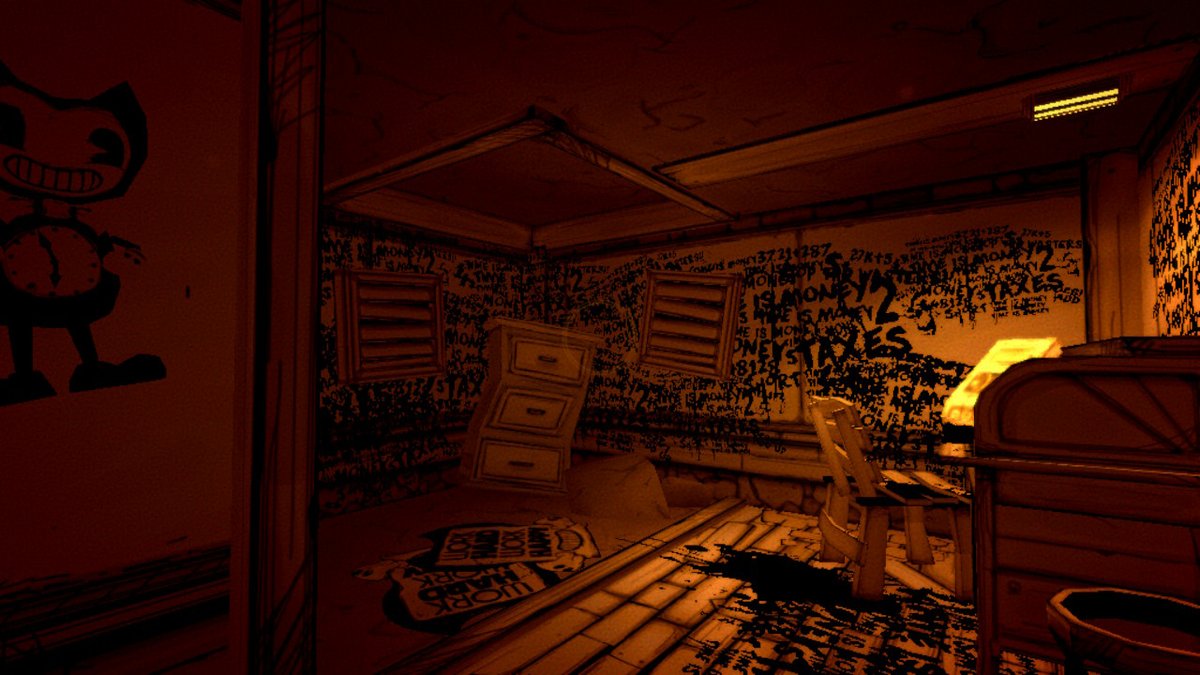 As his journey progresses, Henry becomes unsettled by the scale of the studios and the work in the lower floors which seems to stem beyond the creation of animated cartoons. Animatronics disembodied and discarded corpses of some of Joey Drew’s characters are littered throughout the workshop, and with demonic incarnations dwelling in the darkest pits of the studio it’s clear that something has gone terribly wrong here.

The core mechanic of this adventure game are the diverse puzzler elements. When not hiding from the ink demon or fighting off the many enemies in game you’ll have to use your wits to re-power the studio and solve its mysteries. Whilst most of the puzzles are simplistic there is a functional feel to them and, although the unlocking of each hidden room and the rebooting old machinery signals one step closer to escape, it also signals the freedom of the ink corruption, if you fail to stop it in time. 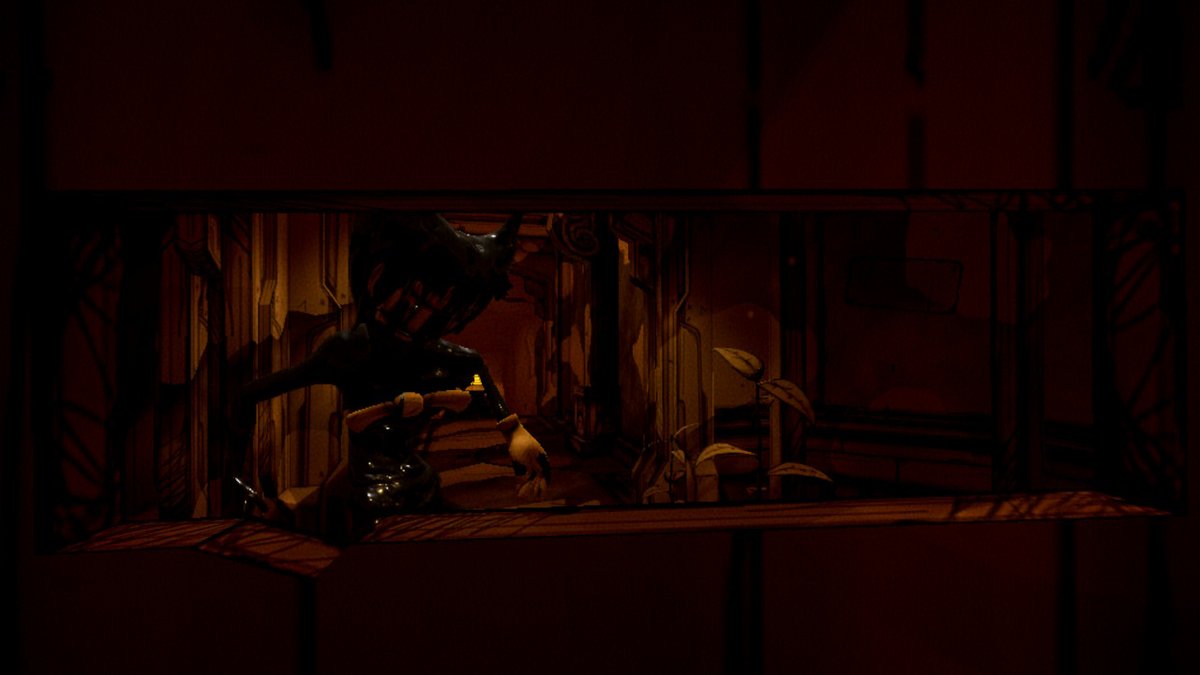 The narrative itself is relatively sparse and told through off-hand comments from our protagonist and audio logs left peppered around the workshop. The recordings which have been discarded by previous employees loosely outline the narrative through monologues of disgust, confusion and concern over the practices under Joey Drew’s orders. Lack of structured storytelling leaves the directing role to you, as you patch together your theories and a timeline of events that resulted in the studio Henry finds himself in.

The one element that stands out as clunky and unpolished is combat. Though it’s only a small part of the game its presence is prominent enough that the sloppiness is notable. Equipped with only a wrench with minimal reach and power you’ll often feel unable to deal with even the simplest of foes. Because of the speed and number of even base level enemies it is often difficult to dispatch them without getting hurt or even worse, getting killed. In a game which otherwise flows effortlessly this is one failing that occasionally grinds it to a halt. 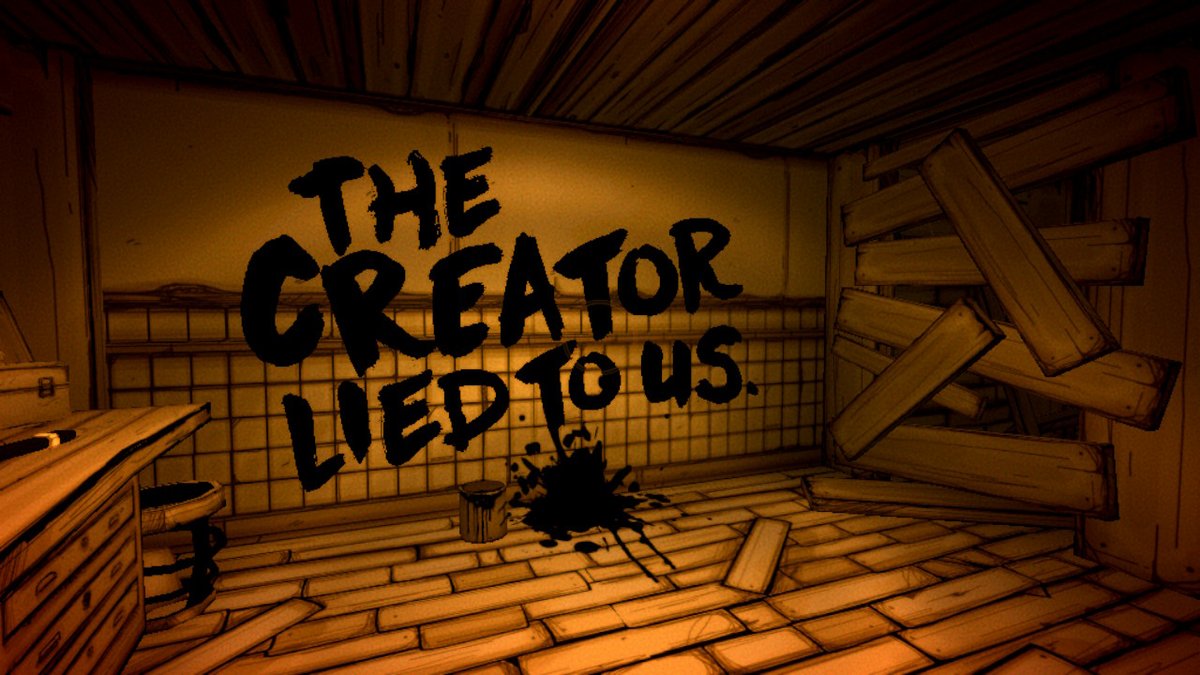 The atmosphere and tension that is present through the game is partly due to the graphical design of the game. Visuals are a soft cartoon cell shaded style drenched in sepia tones. Despite the charming graphics this puzzler still manages to convey a sense of horror through its childish illustrations. Corridors are drenched in darkness and thick bubbling ink swells and pops underfoot; sinister sound design creates a sense of dread and constant fear that you’re not alone whilst clever yet subtle jump-scares add to the rising tension.

At the heart of the game is the message of corruption, suffering and horror. Though it falters slightly due to its weak combat system the game is otherwise delightful and, with a unique and twisted story, Bendy and the Ink Machine is an indie title that coloured me terrified.

*Code kindly provided by the publisher for an honest review*

Bendy and The Ink Machine 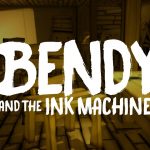