Having played through This is the Police, I was really looking forward to playing through their sequel. This time out though you will find yourself managing a lot more than just who you are sending to a job, this game has a lot more depth to it and mechanics to pick up.

Before you read on I want to give you a bit of a warning, this game has a lot of story scenes in it. Unfortunately, as much as I love the artwork and how this game presents the story to you, there just felt like there was too much of it and I found myself drifting away a bit. I didn’t always see the relevance of certain scenes which could have helped shorten it down a bit. So, parts of the story will be in this review because it is hard to avoid but I will try to keep it to a minimum. 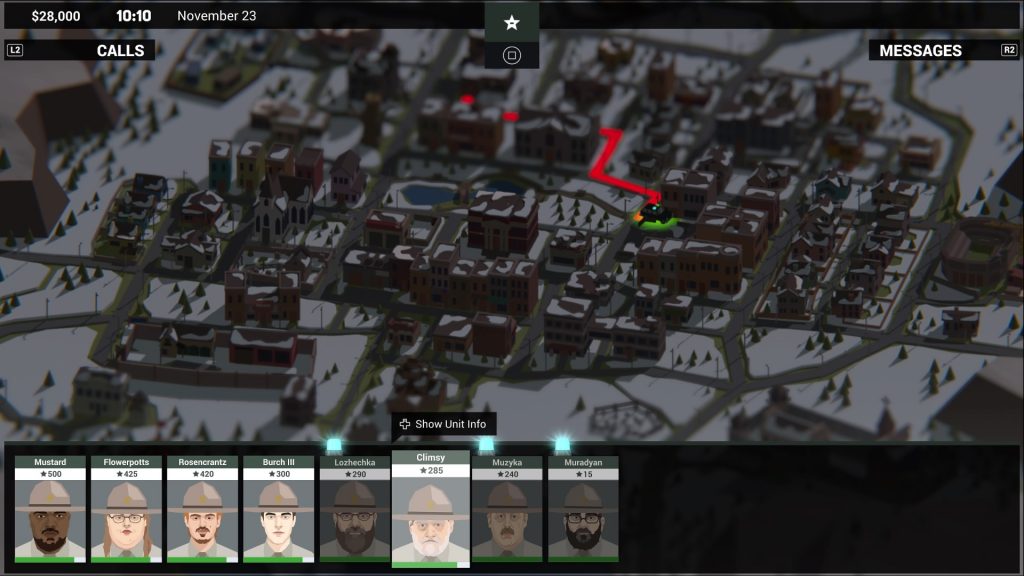 You find yourself in snowy Sharpwood after the town Sheriff is killed by the local neckties gang in a suspicious tip-off that ends in an ambush. A female officer is thrown into the spotlight of Sheriff and you wouldn’t be wrong for thinking this game is going to be about how you are going to get her through the new career and bringing the neckties to justice. However, we are quickly reintroduced to Mr Boyd from Freeburg and before you know it he is in the driver’s seat.

Once you get through the long introduction you are presented with a familiar site, your game map. Here is where you will spend most of your time as you send units out to deal with crimes happening around your city. The basics from the first game are still there but this game adds a few new things into the mix. Calls now have a minimum skill level that you need to reach with the officers you select to be able to answer it. When they reach the call, it is likely that you will have to decide between 3 actions which will determine the outcome. I liked being able to decide the actions my officers would take at a call, it took away that feeling that the outcome was completely random.

This is The Police 2 also offers a far better cop management aspect to the game. Your officers develop over time as they attend jobs and you get upgrade points to dish out in a number of areas to make your cops stronger in certain areas like stealth or shooting. Alongside this, you can now also equip your cops with certain items like tasers, pepper spray and a baton. Reaching certain levels unlocks perks that will give you extra options when at jobs such as kicking down doors, unlocking windows or an extra move action.

However, the biggest change to this game is the addition of the tactical missions which take on turn-based combat. Similar to that of XCOM you take control of a group of cops and control their movements and actions throughout that job. The game does a great job of offering you a number of different ways to approach the call from using one of you many non-lethal options to having a full-on gun battle. I loved this style of gameplay and looked forward to the next tactical job, but it did seem to just be thrown in amongst the odd shop theft.

At the end of each day, you receive ring pulls off beer cans, odd I know, that you can spend on new officers or equipment depending on how many arrests you made or how many criminals got away. This is the best way to build up your cops and equipment to ensure you have enough officers on duty each day. As in the first officers will call in sick or have ridiculous reasons for wanting a day off. Find yourself not having enough cops to respond to jobs will mean no ring pulls, 3 days without ring pulls and it is game over!

As you get further into the game I think it is fair to say that This is The Police 2 gets difficult. Tactical missions always run the risk of losing cops if you end up in a shooting match, managing corruption and trying to make money off jobs becomes a necessary evil and just the day to day management of your cops. This game throws a lot at you compared to the first one and it’s hard to say whether this is a good thing or not. I enjoyed aspects of this game but found myself always worrying that my last day in charge was just around the corner.

If you have played This is The Police, then you will enjoy this sequel as it holds on to what made the first game great. The artwork for the story is great, I still love the map of your city where most of the game plays out, use of the DualShock 4’s speaker adds to the gameplay and the music just seems to fit with the game. If you haven’t played the first, then you may be a bit overwhelmed by all the components in this one, but it is still a fun game to play. The controls are easy to pick up and the mix of turn-based combat with the rest of the game keeps you on your toes throughout.

For the trophy hunters, you have 13 trophies to collect including a Platinum. Now they all seem easy enough from their description but as I mentioned before, this game is hard, and you are more likely to hit game over before you get all the trophies.

This is The Police 2 builds on what I enjoyed most from the first game. At times all the added bits can become overwhelming or frustrating, but they are what makes this second instalment better. This game is challenging while still maintaining a charm that keeps you coming back to the office the next day.

This is the Police 2 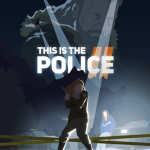