Since Telltale’s The Walking Dead series started in 2012, players have been on a journey propelled by emotion, sublime character development and heart-wrenching cliff-hangers. Along with young protagonist Clementine, the success of The Walking Dead has grown immensely and, just before Christmas 2016, the first two episodes of the third season finally landed. And that’s just as well because TWD fans had some serious questions: What happened to Clem and baby AJ? How would the multiple endings of season two tie into the third season? Who is Javier and why is he featured so prominently on the season three poster? No major season three spoilers ahead but I will discuss each episode in turn. You may wish to read only to the furthest episode you have played or jump straight to the spoiler-free verdict.

The Ties That Bind Part 1 introduces us to Javier García and his family during the initial zombie outbreak. A disgraced baseball player, Javier is now a man desperate to protect his niece, nephew and missing brother’s wife from the dead and from the living. Clementine still has a role in A New Frontier but she takes a backseat allowing the story to follow and explore the García clan. This is a brave move considering the mega fan-love for Clem but it absolutely pays off. The dynamic between each member of the García family is soaked in tension of various kinds; adolescent, resentful, and sexual, with the chance to aggravate or remove these tensions with the dialogue choices and decisions you make as a player. 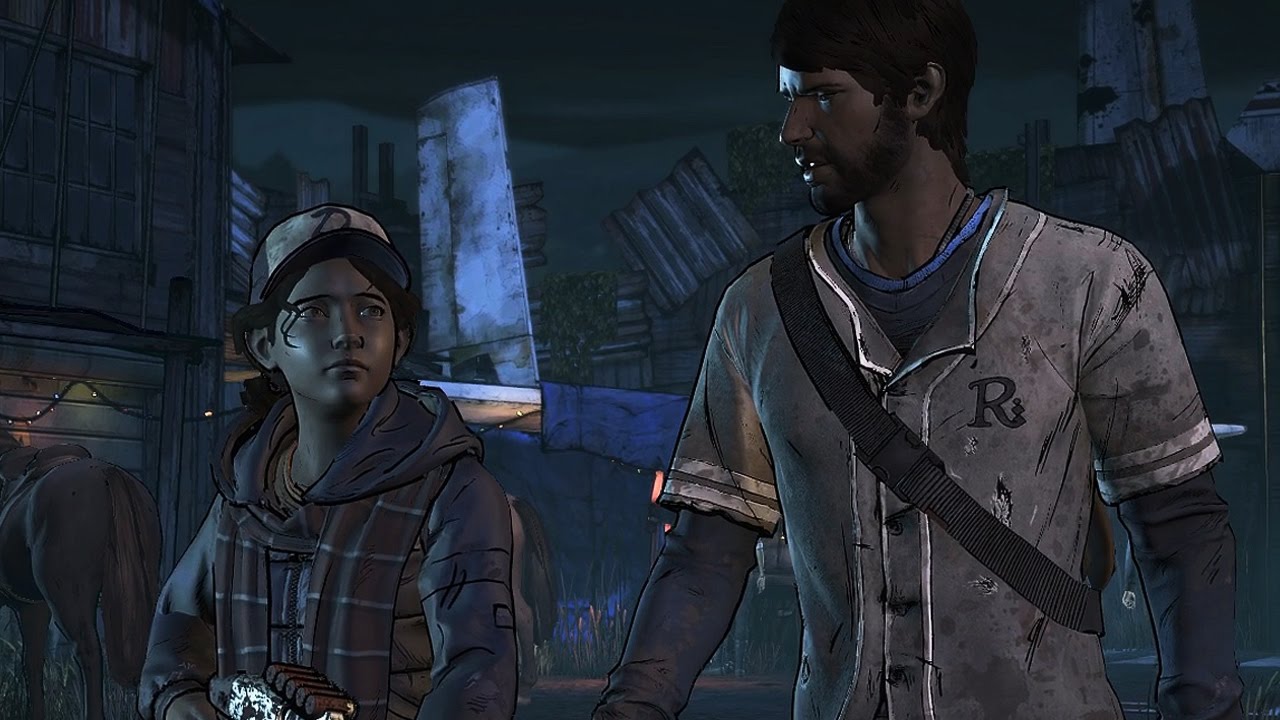 The first episode kick-starts the story beautifully, incorporating interesting cutscenes, difficult moral choices and a shocking final beat that I never saw coming. We see a lot of flashbacks in the first episode and this is a mechanism employed frequently throughout all five episodes. Whilst Javier’s memories are woven into the story successfully, Clementine’s flashbacks often feel rushed. Sadly, they rarely deliver anything of importance and, in the first episode, serve only to separate Clem from whoever the player left her with at the end of season two. Thankfully this is the only misstep in a near-perfect opener, an episode that leaves you desperate to know what happens next.

In The Ties That Bind Part 2, Jesus (a bearded survivor from the Hilltop community known to fans of the comics and FOX TV series) makes his game debut. It did feel a little as though Jesus’ part could have been played by an original character, but it was still nice to be reminded of the interlocking connection between game and source material. More importantly, however, Javi’s reactions to the episode’s events felt so realistic and were beyond touching. The choices I was forced to make in these two opening episodes absolutely felt like they mattered, I felt as though I had a huge say in how I wanted this story to play out.

In the mid-season episode Above The Law, our ragtag band of survivors finally reach the pioneer town of Richmond. Now they’re trapped with sinister survivors calling themselves The New Frontier. Episode three is very dialogue heavy and focuses on the interactions between the García family and The New Frontier during their (pretty unsuccessful) attempts to get along. Tension builds extremely fast here and, as a player, you’ll be asked who you should trust in a town full of liars and cheats. Despite the interesting set-up, the pace of Above The Law is a little slow and – generally speaking – the episode focuses on laying the story foundations for the rest of the season.

Although Thicker Than Water starts off with another strong García family flashback, the episode as a whole wasn’t the season’s strongest. With the finale slowly building up in the background the foreground of the game is dominated by character interactions such as Javi and Kate’s developing relationship, Clementine’s struggle through puberty and Gabe’s (somewhat annoying) frustration with his surrogate parents. Although these conversations were interesting (Clementine’s confusion at what her body is doing in a world without education being especially powerful) it felt as though they were more about establishing character traits and therefore didn’t belong in the penultimate episode. The pace does improve during the episode’s final third but, by this point, I was already frustrated. The dynamic was a bit off and it showed.

The long-anticipated finale From The Gallows dropped at the end of May with enough action, intensity and shocking moments to rival any TWD storyline. The plot focused on saving the zombie-infested town of Richmond and, while I found myself less fussed about the fate of the town and its minor secondary characters, I was desperate to know what would happen to Javier and his family. As with S2, the season finale has a variety of endings, all of which are tainted by either death, loneliness or loss leaving an uncertain future for whoever you manage to keep alive. Verdict: Surprisingly, A New Frontier mixes up the popular dynamic established in seasons one and two. But the introduction of the García family is a risk that pays off and Javier’s empathy and love for his family made for a protagonist I loved just as much as Lee in season one and Clementine in season two. Although the connection between season two and three is relatively weak, season three explores themes that are rarely found in videogames. Bottom line, A New Frontier feels fresh, tense and innovative. The most memorable season yet.