The Star Wars Battlefront series has always been credible for it’s ability to somewhat ease the insatiable Star Wars void that sits inside fans of the iconic, sci-fi franchise. Come on fans, you have to admit that no matter how much you indulge in the series over a multitude of mediums, you always want more. This is where the Battlefront series shines. With it’s spectacular portrayal of Star Wars settings and events combined with trademark sounds of blaster rifles and Wookie cries, the Battlefront series definitely takes pride in it’s ability to moderate that galaxy sized void that sits inside you, regardless of who’s hands the game series sits in. It goes without saying that EA DICE’s sequel to Battlefront (2015), Battlefront 2 upholds that very same vibe the series is renowned for maintaining. 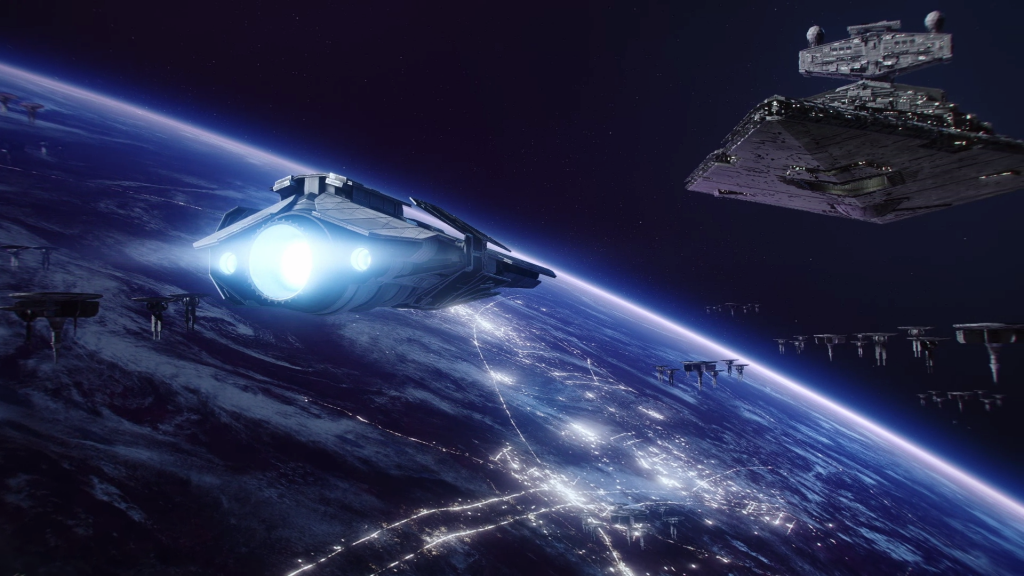 After an onslaught of slander from disgruntled fans in regards to the lack of story mode in the prior title, EA DICE constructed a good 5-8 hour long campaign with an original story-line featuring a mass of new Star Wars locations and characters to fall in love with. Battlefront 2’s campaign follows the story of Iden Versio, commander of Imperial Special Forces commando unit Inferno Squad. As expected, Battlefront 2’s campaign is brimming with quintessential Star Wars elements. Across the extent of the story we see conflict of morals in a once indisputable member of the Galactic Empire as our lead strives to adhere to Emperor Palpatine’s evil bidding, romantic sparks hidden beneath unspoken words and pretty much everyone has a “bad feeling” about EVERYTHING. This not only emits that trademark Star Wars feeling the series thrives off but also brings to light the on-point casting of characters and their stories, in particular that of Iden Versio who’s voiced by Janina Gavankar. Characters are brought to life by the pure emotion that’s derived from their passionate performances making the campaign so pleasantly engaging and enjoyable to play. Moreover, EA DICE do well to identify Iden’s story’s whereabouts in the Star Wars timeline within the first mission or so of the campaign – I shall avoid spoiling. Not only is this beneficent for offering coherence for die-hard Star Wars fans, but it also means you can spend less time trying to work out where Iden fits into the well established Star Wars timeline of events and more time savouring the excellence of the campaign itself. 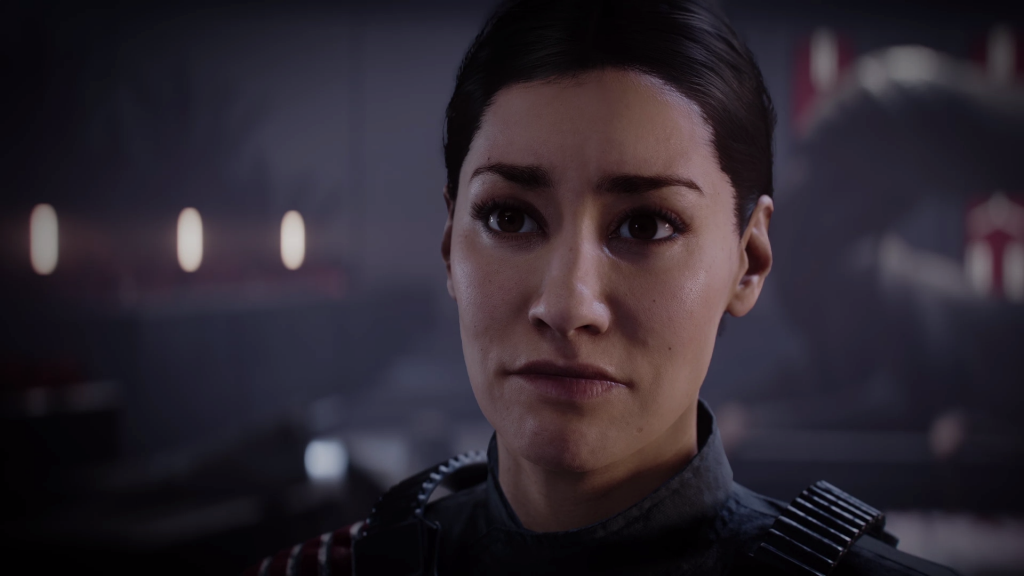 Yes, exploring the far reaches of the Star Wars galaxy is none other than a thoroughly enjoyable experience in Battlefront 2. Whether you are navigating through patrolling units of war-bred Storm Troopers on Vardos – a planet plagued by the relentless reign of the Galactic Empire or revelling in the familiar sights of Endor, taking in it’s natural and tranquil aura, every location within the game has been so well conceived it’s almost like playing out one of the Star Wars movies. This is true in both aesthetic and sound. Every painfully inaccurate blaster shot from a Storm Trooper or Tie Fighter that screeches past as you pilot an X-wing possess those familiar, iconic sounds that completely emerge you into the Star Wars universe as you follow Iden on her journey. 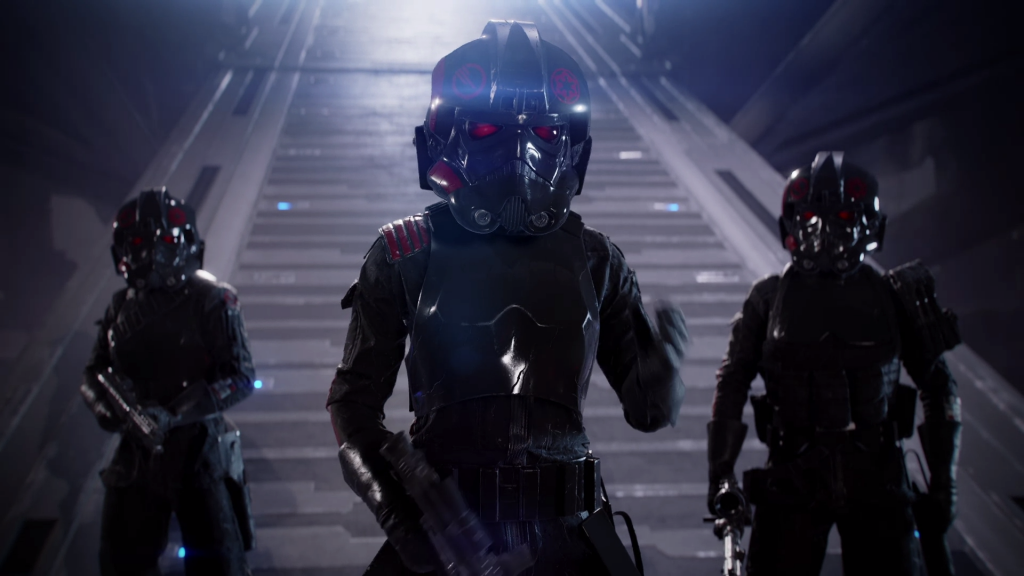 Gameplay also feels surprisingly versatile as far as a Battlefront game goes. Spanning the entirety of the game’s proceedings you are presented with the opportunity to play as both oppositions, fight as a Jedi, utilise the sheer power of some of the most iconic Star Wars vehicles and still retain the pleasure of a good FPS with an assortment of inter-galactic weaponry at your disposal. Much like it’s predecessor, Battlefront 2 features Starship battles in which you can pilot one of the many ships spanning across the three Star Wars eras. Unlike it’s forebearer however, taking to the skies isn’t nearly as straightforward and rigid as EA DICE’s first Battlefront title. Taking down an Imperial Cruiser whilst piloting the Falcon really demonstrates the more elaborate control system for flying implemented in Battlefront 2 and although more testing, it’s far more gratifying and immersive having to crane your head as you fly, feeling the struggle as you navigate tight twists and turns through intense battle sequences. Stealth is a newly introduced gameplay mechanic in this particular Star Wars instalment. It’s not necessarily implemented well enough to be a more forefront approach to combat however, it does provide some means of aid in allowing you to whittle down enemy numbers. 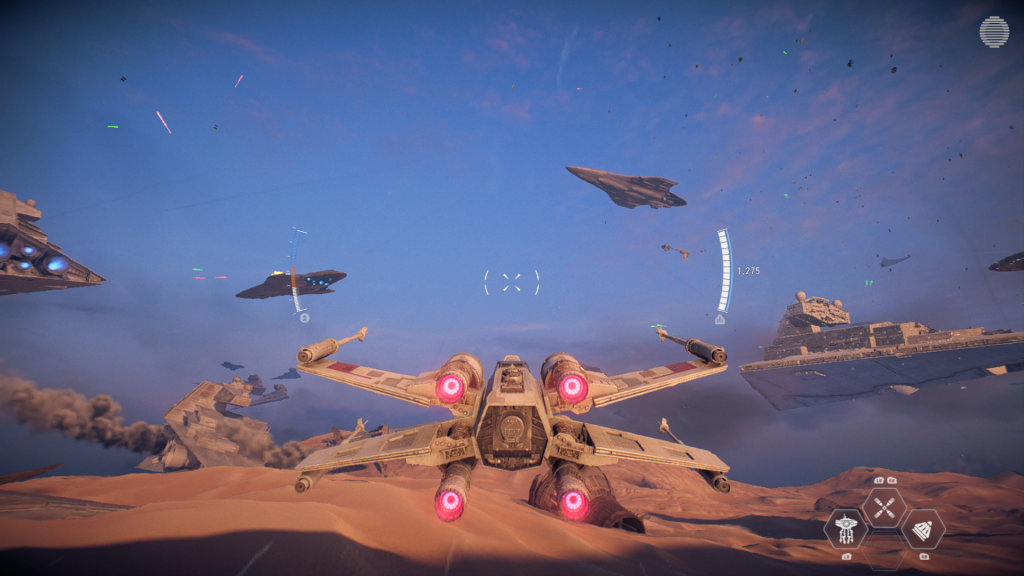 Now, what would a Star Wars installment of any sort be without the presence of an insanely lovable little droid – enter the ID10 Seeker Droid. This nifty little mechanical companion lives in a compartment in Iden’s backpack and harnesses the ability to deliver fatal shocks to unwary enemies. Not great for taking on hordes of enemies admittedly but it’s a convenient ability for dispatching that pesky Storm Trooper cowering behind cover. All in all, gameplay throughout the campaign is pleasantly diverse and really deters the title from feeling like a typical shooter game. What’s more is as you go from a cutscene to battling on the front-line through the Star-ship graveyard on Jakku to hopping in an X-Wing to swing the odds of the battle that ensues in the air, transitions between these differing bits of gameplay are wonderfully fluent and constitute a much smoother more immersive experience. 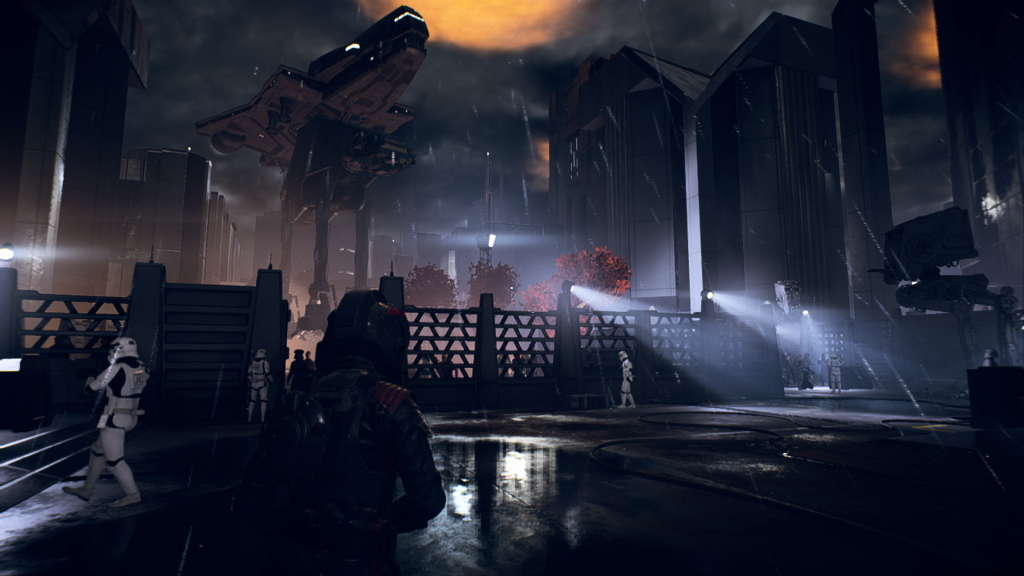 EA DICE’S first Battlefront installment featured a multiplayer that many lost interest in after the initial nostalgic overload wore off and it’s alleviating to see a more functional multiplayer incorporated in Battlefront 2 (loot crate controversy aside). Part of the reason interest in the last Battlefront game dwindled rapidly was due to it’s lack of game modes and maps and this is an aspect that has definitely been rectified in Battlefront 2. There are five far more functional game modes that provide you with both fast-paced action or more teamwork-reliant objective play. We also see the return of Galactic assault, a game mode far more engrossing with a more impressive multitude of maps. In this go-to game mode you are able to play out iconic battles over the three Star Wars eras in bigger teams. Moreover you can play as varying armies dependant on the map, for instance you are able to play as the Separatist Droid Army as they push towards the Royal palace in Theed City on Naboo. 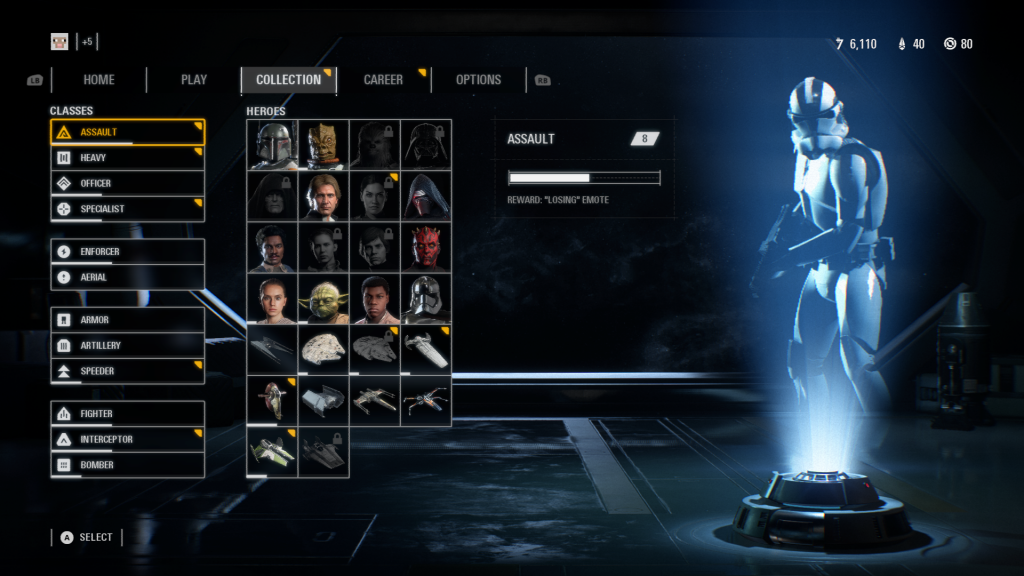 Content isn’t the only aspect of multiplayer that’s thrived in Battlefront 2 however. As you play and level up you can see a lot more emphasis on the Star Card system which allows players to cater their classes to their preferred play style. You can now add Star Cards to Starships to give you bonuses as you play airborne game modes or add them to the generous selection of heroes and villains to give the you some advantages in the Hero vs Villains game mode. However, in non-character focused game modes you have to earn the pleasure of playing as a character. Yes, you are no longer scouring the map in order to find that hero pick up and having it snagged by a cheeky team mate just as you’re about to grab it, instead you have to accumulate a specific number of points in order to purchase the ability to play as a hero or villain. Points can be obtained by acquiring kills and playing the objective. This is a wonderful way to instigate more teamwork and objective play. Furthermore, also introduced in Battlefront 2 is class specialisations: Assault, Heavy, Officer and Specialist. This nifty tweak to player customisation really takes the Battlefront series back to it’s roots and puts considerable focus on you choosing a class you are more confident playing and sprucing it up to make it even better. The ability to upgrade your classes through attaining Star Cards and purchasing new weapons is all done through a loot crate system. By logging in daily, levelling your character as you play or completing challenges you are rewarded with a variety of loot crates each containing varying items. At times you will feel the unbearable grind of trying to attain loot crates but personally I’ve warmed more to this system as opposed to that implemented in the last Battlefront title. I will briefly touch upon the whole loot crate fiasco only as to bring to light that Battlefront 2 is completely devoid of any micro-transactions. Thanks to the backlash of the devs and publishers unwise decision to try and introduce them, DLC is also currently free which is an undeniable bonus. 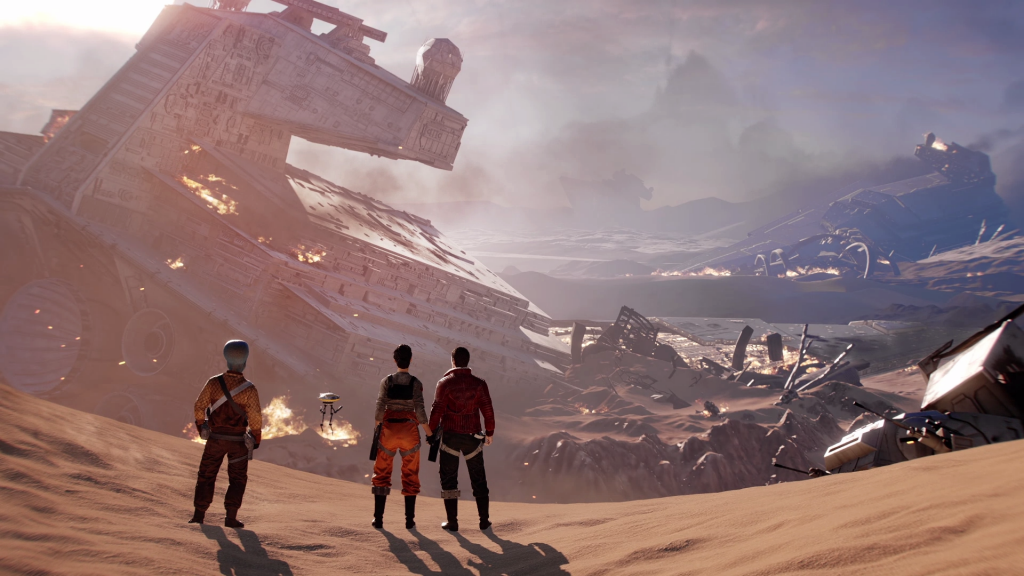 With a campaign starring well-cast leads undergoing a whole new Star Wars story in breathtaking settings spanning the three eras of Star Wars, Battlefront 2 has definitely been a welcomed asset to the long line of Battlefront games. It’s multiplayer is remarkably more functional and ultimately more enjoyable than that of the last, featuring a wider variety of maps, game modes, heroes (and villains) to play as and vehicles to navigate the war zone in – nothing like a bit of grand theft Tauntaun. Furthermore, we see Battlefront 2 govern a real nostalgic vibe as class specialisations take the franchise back to it’s roots. Battlefront 2 is a game for both Star Wars fans and multiplayer lovers alike and I’ll without question be in eager anticipation of any DLC to come. 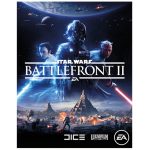