The best puzzle games hook you with a deceptively simple concept before adding layers of complexity, nuance and challenge to foster that maddening ‘one more go’ mentality. By then, it’s too late – you’re addicted, and the air is blue with profanities as you try to fathom your way through the levels using a mix of lateral thinking, strategy and desperate trial and error. Road to Ballhalla managed to elicit a whole range of emotions from me, leaving an abiding impression of something just a little bit different.

On first introduction, it looks innocuous enough, perhaps even a little generic: roll a ball around a grid, collect orbs and avoid obstacles in time to the music. Control is via the left stick, with R2 providing a boost function to negotiate trickier sections. Boost must be used sparingly, as damage taken in this state will prove fatal. Survival to the end is the main focus, collecting as much as possible along the way. You’ll encounter all manner of interesting puzzles, including switches, keys, laser traps and portals, and the game is constantly mixing things up to keep you on your toes. It’s great fun – simple yet tricky in the time-honoured tradition of the best puzzlers.

The first area, Corollia, serves as your tutorial, with five sub-levels to negotiate. Each level carries an objective – for example, collect all yellow orbs and respawn fewer than 5 times–and 100% completion will grant you the full amount of yellow tokens. You can, however, still unlock the next area so long as you accumulate a set minimum number of tokens, so the completionist approach isn’t mandatory. Respawn points are scattered generously across the levels, and restarts are free from loading screens, significantly aiding the flow of the game. On completion of the sub-levels, each area features Rush challenges- essentially speed runs of completed levels–and this is a great way of extending the longevity.

During Corollia you’ll discover the sense of humour that pervades every aspect of Road to Ballhalla and elevates it above the surfeit of me-too puzzlers on the store. There are text hints dotted around the level, but you soon learn to view these with a healthy amount of caution and suspicion. The game is actively trying to wrong-foot you, sometimes giving incorrect, even lethal advice, before declaring: ‘sorry, just messing with you.’ I cannot recall being trolled in this way by a game before, trying to establish if in-game hints are genuine or simply a trick. There are even occasions where checkpoints prove counterproductive and should be avoided. It certainly adds another dimension to play, and personally, I welcomed it.

Having completed the first five tutorial levels I was drawn to an area ‘marked do not enter.’ Naturally, I attempted to enter, intrigued, only to have the game mock me for doing so. With repeated attempts the game varies the messages: more insults, silence, then finally the promise of a trophy if you stop entering the area. It was one of the more novel and entertaining ways of earning a trophy and speaks volumes about the irreverent tone of the game. Once you move to the second area, expect the challenge to ramp up quickly. Trust me, you’ll be thankful for those rapid restarts. 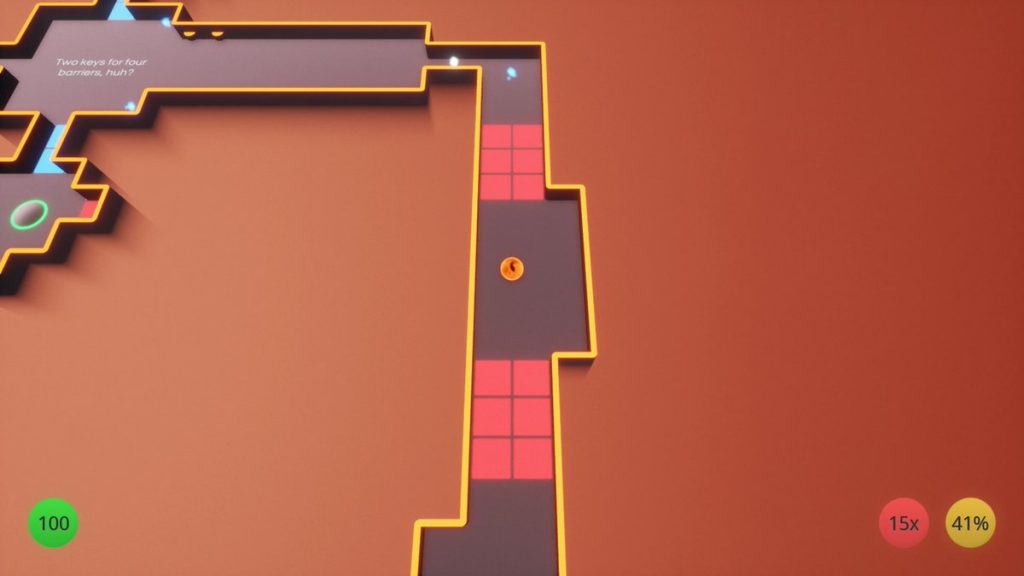 The playfulness extends to the options screen. Under ‘easy mode’, for example, you have a choice of ‘disabled’ or ‘not enabled.’ Click on the ‘get some cheats’ button and in return, the game will simply tell you there are no cheats. The ‘totally extensive stats’ button features – you guessed it – very few actual stats, simply a count of your deaths throughout the game. Even if the humour is not to your taste, it certainly lends the game a distinctive identity. By the end, though, you may have grown weary of the ball puns.

Over time you unlock some cosmetic upgrades, with the ability to change the ball colour, the style of the trail effect that follows your ball and the colour of the trail itself. Even here the dev can’t resist a little gag, with text declaring that every ‘role-playing’ game needs some character customisation. Visually, the game adopts a simple and clean aesthetic with sufficient variety between areas, whilst the music is infectious and responsive to the on-screen action.

In the final assessment, does Road to Ballhalla stand out? I think it does. I’ve seen complaints online about the game being too short, but for me the Rush challenges and the desire to return to levels in the quest for 100% completion keep the ball rolling a little longer. Admittedly there are frequent moments of frustration that will threaten to make you go, er, ballistic, but the distinctive tone and humour are likely to carry you through. 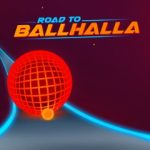