Honestly, I had heard of Octahedron before I started this review. I had seen a few videos and reviews from its PlayStation 4 release and it has always intrigued me. The bright colours, the pumping soundtrack and the creative platforming are traits that are usually right up my street. I jumped at the chance to write the Nintendo Switch review of the game and hoped for some challenging platforming and a feast for my eyes and ears.

There’s not much of a story to Octahedron, minus a short video at the start and the end. It’s abstract and weird but fits the style of the game well. It leaves a lot to the imagination and keeps you intrigued. The cutscene at the start of the game is very short, it’s eerie and gives you a little background to your character rather than just allowing the player to plough through the games varying stages.

Your task in each level is to get to the goal, most of the game is the standard fare for a platformer apart from one crucial detail. You can create your own platforms under your feet at will, this creates a rather different dynamic to the whole experience and leads to come very creative and unique level designs and platforming challenges. The amount of these platforms to use at any given time varies and sometimes there are lasers for you to pass through that reset that counter. Deeper into the game there are also varying platforms for you to create that have different functions, I won’t spoil too much about it but they are selectable on demand and switch up the gameplay even more.

One of the things I really enjoyed about this game was its tutorials and the way it taught you how to navigate its varied hazards and use the tools present in its world. It did it without actually telling you, the levels are designed so well that you learn how to use new things and avoid new enemies or foes in a very natural way. There are no text prompts, no breaks to explain new additions, it’s just all very well designed, smooth and all the progression is very natural flowing. It’s exceptional game design when your being taught how to do things without actually being told how to do them.

Of course, with any game of this type, there are collectables and they come in two forms in Octahedron. The first is the flower collectables and they act as the gate to the next world, you have to collect a certain number of them before you are allowed to access the next world on the world map. They are the easiest of the two collectables and the most abundant, you have to create a platform and ride it through the numerous lights hanging around the stage. These lights then break and form the flowers elsewhere for you to collect. It’s a unique system and yet again makes the games platforming and stage design feel very unique. Some of these lights have health pickups in too which at certain times through the levels are a godsend. The style to the pickups took a few levels to get used to but after that became very natural and very addictive to try and find. The other collectables are little triangles that you have to find, they are a bit more elusive and are smaller in number. Another nice change is that you cannot go on a suicide mission to get them as they are not collected as soon as you touch them. After you touch them a little string connects it to your character and after a few seconds that disappears and you collect the collectable. This means you have to have a safe landing and survive for it to count. No jumping to collect one and not being bothered if you live or not, it makes you think a little more about these collectables and makes them a bit harder to get.

Each stage in the game has badges to collect, there is one for no deaths, one for collecting all the collectables and one for completing the level in a certain time. This adds a lot of replay value and if you want all the badges you will have to approach each stage in varying play-styles. This also adds another level of completion to the game, gives you more bang for my buck and gives you little more to do on each stage. Also included are achievements, why Nintendo has not deployed these system-wide yet baffles me, most games I have played recently on the Switch have inbuilt achievement systems so it’s obviously something developers and gamers both want. 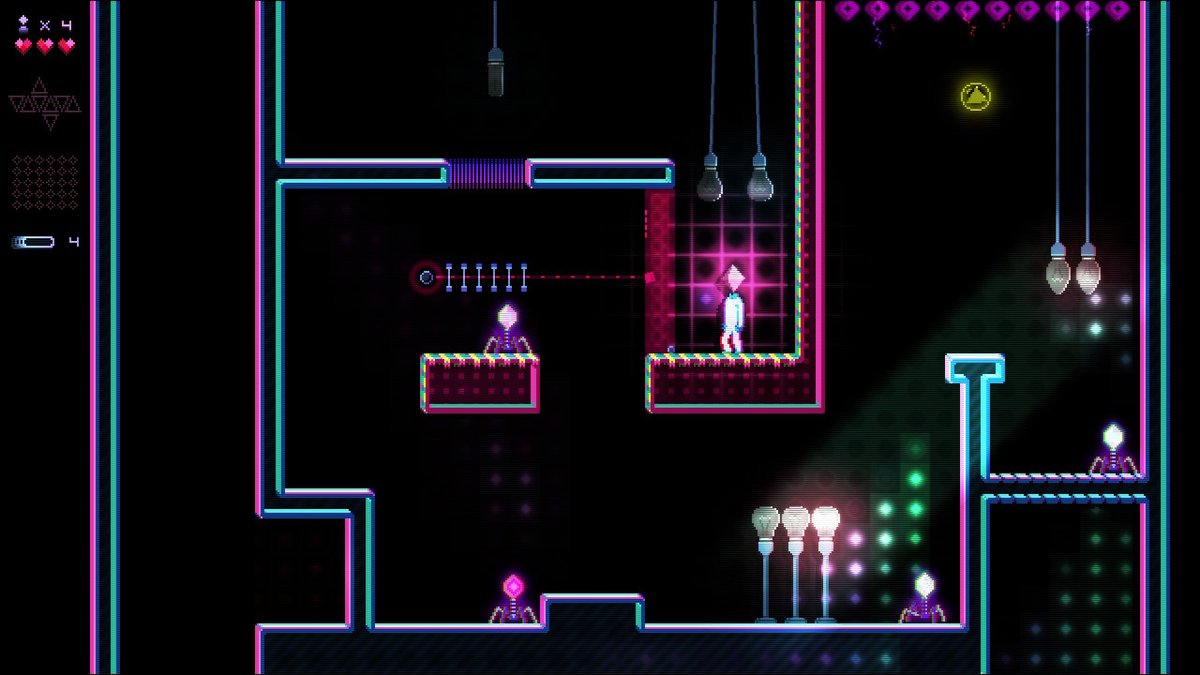 The graphical style in this title is off the charts, it’s so bright and colourful. It’s a feast for the eyes, pulsating, glowing with every move and action you perform. Each level has coloured dots in the background that light up, fade and pulsate when you collect an item, create a platform or move throughout the stage. It all creates a unique visual style that I have never seen before and that’s very rare these days and something I found very special about this beautiful little game.

Octahedron has a thumping soundtrack that goes hand in hand with its disco visuals, it’s a perfect fit for the style of the game and it’s wonderfully put together.

Performance wise, Octahedron was flawless. A platformer of this type needs to be because when you need to pull off inch-perfect jumps and platforming feats, skipped frames or framerate issues would be very offputting. Luckily I had zero issues, zero crashes and a great experience all-round.

Octahedron is beautiful, creative, unique and quite hard in places. If that’s your thing then your money will be well spent here. The soundtrack is amazing, you learn without realising that you are learning and the game’s level designs are superb. You are given fresh elements very often so the game does not get stale and there’s enough replay value to keep you invested for some time. The only thing that may put some people off would be the difficulty, it’s not Super Meat Boy level difficult but it can get quite challenging. All in all, it’s a very well performing unique experience that’s very enjoyable on the go and can be played in short bursts on this great little portable system. 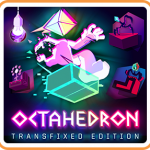