After being told I had MotoGP18 waiting for me at home for review, the ‘suspension’ at work was unreal. I raced home, got in and booted the game up. Now, I don’t have a history of playing Moto GP games however, having a interest in racing games since PlayStation 1 times, I thought this won’t be too bad.

I wanted to get straight into a race and to see how I faired without editing the setting. Oh my god, that was a mistake. On my first corner, I slid off the track, into some sand, through the tire wall and then took a hike through wooded forest. After watching my rider bounce through all of this for five seconds, I was reset on track, losing any progress I made on any positions. I thought it best I had another go.

Finally catching up, I hit the back of the pack and after taking the corner reasonably well I was in high spirts, until I hit the back of the bike in front of me and bounced off. This time sliding down the track as if I had been ripped off a tree hugging competition. Immediately, I felt it was time to leave the race and go through the tutorial. I can understand that this game is going for realism in the terms of motorcycle racing, but for a pick up and play kind of game it isn’t a perfect fit. 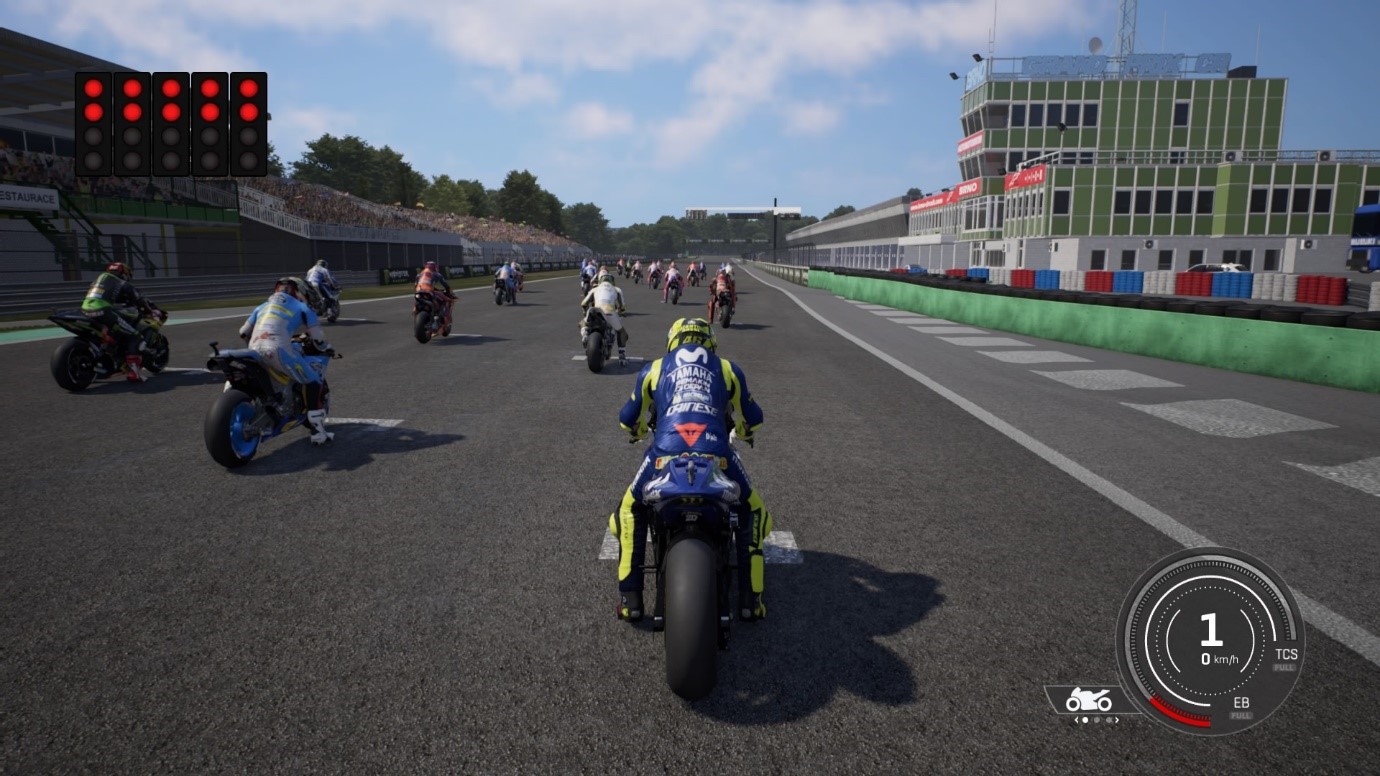 A few races after the tutorial, I started my career mode. I opened to the customisation page and I have to admit, customisation is cool, lots of helmets, gloves and boots to choose from and actual rider customisation down to riding style is there. You get to see your kitted-out rider next to the bike you will be riding for this season. Once you are happy with your customisation, you are taken to the career menu where you can select a few things. Other than settings, leaderboards and progress trackers, you are tempted into your emails to see you have couple outlining the seasons ahead. Once you have skipped those, you can now select your race weekend.

MotoGP18 introduces locations extremely well before race weekends. It then takes you straight into build ups on social media about your player. However, I did come across an annoying little thing when the screen would tell me its 100% loaded for like…. 2 minutes. Is it 100% or not?

Pre-race starts and taking a deeper look at what I am playing with, I wasn’t over the top amazed. It doesn’t have the level of detail that Gran Turismo Sport has or Driveclub. It’s more of a F1 2018, but with less effort.(I see it as if you picked up FI 2018, stole the main stand, the track, the sand, the tire wall and the sky, plopped it down on a map, turned graphic ratings down to ultra-low, chucked some bikes on it and said here you go, here is Moto GP18.) Don’t get me wrong, the detail in the bikes and the riders are somewhat great to look at, but its let down by everything else. The eyes on the AI models and riders is something a bit distant. I know it isn’t important as it’s a racing game, but if it has made me not look at their eyes ever again, it has to be noted.

So, you start your first race in the rookie league. The race broadcaster sounds about as enthusiastic as a kid in a cardboard box factory. Stating the obvious that you can see on screen and then pretty much stays silent after. You are then shown you grid place and then lights out. As you hold down the rev button, the sound of your engine buzzes, almost like having your ear next to a hornet’s nest. Once the pack splits up you get your own little buzz tone until the end of the race.

Racing feels realistic, depending on your difficulty and AI show no uniqueness. They all follow the same trail with no styles or independence. If you overtake a rider, the crowd that is covered in flares and repeated animation give you a little cheer, hip hooray! IF you can finish the race, you watch your rider either shake his head at you in disgust or you watch that daunting stare celebrating with his team. Once that has ended, you see how your individual progression has got on and then booted back to the career screen. Rinse and repeat.

The idea in career mode is to rank as high as you can as much as you can until a big team come knocking and sign you up. You have to work through the rookie league, then MotoGP3, GP2 and then the top league Moto GP. As you go, your bike is improved and with enough luck you have made enough progression and reputation that your rider can now pull the moves off like Mick Jagger.

MotoGP 18 doesn’t do enough for me to make me want to keep playing past the first couple of seasons. Graphically its poor and sound doesn’t make life any better. If you are a die hard MotoGP fan, this might just be for you. If you are wanting an experience in 2-wheel racing with steep learning curve, take MotoGP 18 out for a spin.