When I first saw Lapis x Labyrinth I was in awe of its colourful madness. It was during the Kinda Funny Showcase last year that I was presented with this mindblowing eruption of colour and treasure. I like Nippon Ichi games and this game seemed to incorporate all the things I like in video games. Dungeons, loot, classes and loads of flashy cartoony goodness. I just hope that the gameplay lives up to the beautiful art style and over the top effects.

The story of Lapis x Labyrinth is very thin, I would have liked more substance on this front to keep me invested and propel me through all the dungeon crawling. I do not really know what I was doing and why I was doing it. Where was my motivation to continue on? You are trying to revitalise a town on the edge of an ever-changing labyrinth. It’s your job to delve deeper, kill anything in sight and loot all the unknown treasures contained within. That’s about it really, there is not much meat to the story but I can handle that as long as the gameplay is fun. 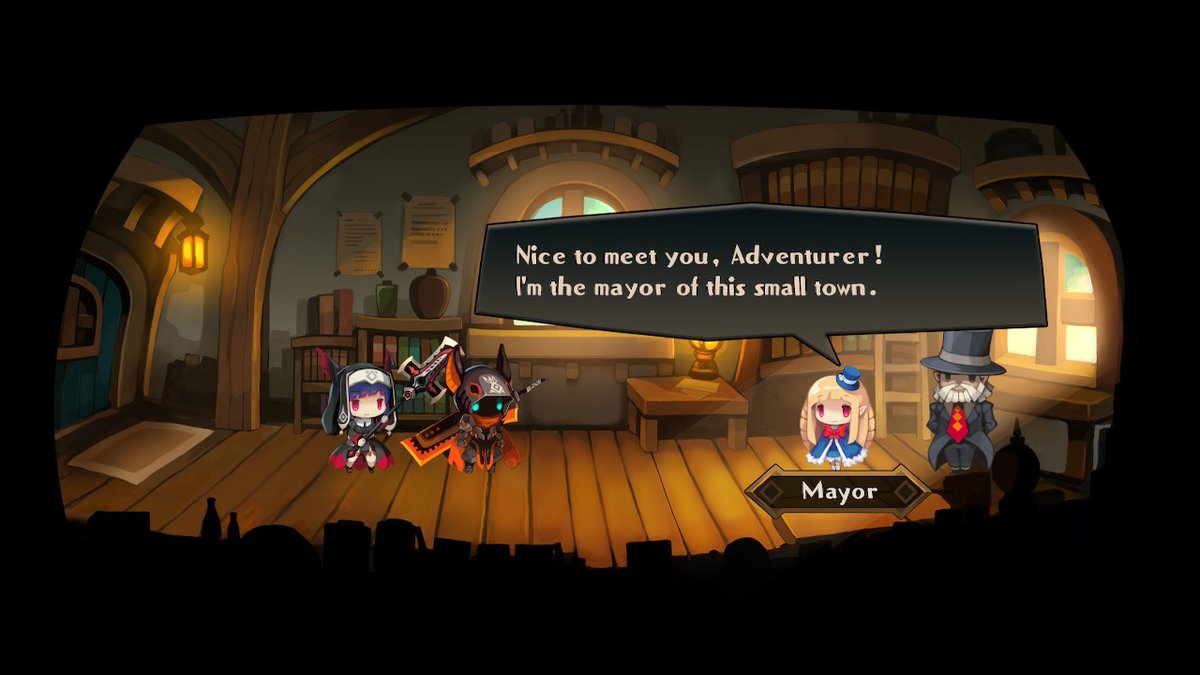 The story is very bare bones

At the start of the game you pick your party leader from 8 classes. These range from Shielders and Destroyers all the way up to Bishops and the Maids. There is a nice mix of characters here with a lot of room for team composition and they all include a myriad of attacks. You also get to choose your first party member, I think I spent far too long deciding this as you are free straight away to recruit a load of these characters. It’s fun experimenting with different setups and team compositions throughout the game.

Your base of operations, as I mentioned earlier, is an old town based near the labyrinth. Due to lack of use, it has seen better days and luckily you have arrived to drag it back into working order. At the start of the game, there is not much in the way of amenities to make use of, you just need to select a quest and get on with it. These quests vary in level and there is always something tailored to your teams level and they can be revisited at any time.

Once you have your team assembled, which can have up to four characters stacked in an adorable totem of cuteness, you are ready to start delving into the labyrinth. This is where most of your time will be spent, fighting and looting to your heart’s content. Your goal on each of the floors is to destroy enough crystals to unlock the exit. These crystals are everywhere and due to the time limit, which to be honest is not too bad, you have to get a shift on and cut out the dilly-dallying. Normally I don’t really like time limits but here I found it added to all the chaos and fitted the swift gameplay.

The combat in this game is very simple, to the point where a lot of the time it becomes a bit of a button bash simulator, depending on your leader at the time you will have a few standard attacks, a few special attacks, a team attack and can swap between any of your available chosen party members at will. It’s a nice system but due to the amount of carnage onscreen most of the time it all feels a bit irrelevant. It did its job though and when there were fewer enemies on the screen I felt I could really experiment with my team and see what worked and what didn’t.

On to the colourful carnage then, believe me when I say this, this game has a lot of stuff going on at once and sometimes you are just a passenger to the bright colours and crazy sounds. For brief moments you are left to do a bit of light platforming but most of the time you either jumped by a room full of enemies and cannot progress until they have been vanquished or you have that much treasure on the screen you cannot see your characters. This is usually due to the fever feature which occurs quite often during your battles.

Your fever gauge builds as you cut, slice and shoot your way through endless swarms of enemies. When it activates you become invincible and the enemies drop an unbelievable amount of gold and gems, literally so much that at times, it completely fills the screen. Pair this with the already manic gameplay elements and it leads to something bordering on the insane, yet quite addictive and thrilling to play. It’s like someone is pouring gems constantly during fever mode and it’s certainly a sight to see.

This game is really centred around treasure, along with the treasure constantly pouring out of the screen and into your eyes you have treasure chests that litter you every run through the labyrinth. The amount of treasure you accrue depends on your treasure combo meter, which resets when you get hit and due to the hectic nature of the game, sometimes this is unavoidable. As I stated earlier sometimes your characters are hidden behind a tidal wave of loot and it’s left to the videogame gods to whether your treasure combo gets reset or not.

At the end of each labyrinth run, you are presented with a results screen. Depending on your success you are given keys and you can use these keys to open end of run chests of varying rarities. You are told what is in the chests but not what level it will be so it’s always a bit of a gamble. It was slightly irksome sometimes though to waste a few keys on chests you don’t want to see a really rare chest you want but don’t have the keys to open. Damn you RNG!

A totem of gorgeous characters

After you have finished the first worlds worth of quests your town starts to expand and you get more stuff to play with. The first things you unlock are a trader and a food preparation service. This is where the game opens up a bit and you can start using your hard-earned materials to further your quest, improve your team and delve further into the labyrinth. It’s fun to see a bit of progression and watch your town evolve due to your many escapades.

Graphically Lapiz x Labyrinth is stunning, the art style is the games biggest draw. It’s simply remarkable, from the hand-drawn characters and monsters to the flashy, bright, colourful effects. Everything is so well rendered and it’s simply wonderful to watch. Even if the action is very hectic, which it is a lot of the time, it’s a gorgeous hecticness that I found quite exhilarating. The graphical presentation is unlike anything else I have played and I loved it.

Sometimes the action does get a bit too much

Soundwise, while the music was brilliant the sound effects were slightly irritating. Your characters make the same noise over and over while attacking and it gets repetitive very quickly. Luckily changing the voices helps as does adjusting the sound settings. I just wish there was a bit more variety to the sound effects, it would have made the world of difference. Otherwise, the soundtrack is fast and punchy and propels you through the games many levels. It’s enjoyable and fits the game style perfectly.

Apart from a very slight pause in some larger battles, I had zero performance issues. The game ran smoothly and I had zero bugs to report. Over the course of my 20 hours or so playing this quirky title, I had no issues that hampered my gameplay in any way. This is how games should be, I was left to enjoy the game and not worry about crashing or poor performance issues. It’s a shame we live in an age of internet patches and game performance seems to be low down the list of important features.

I did enjoy my time with Lapis x Labyrinth, however, it is not without its issues. I would have loved a bit more story and drive to the game, why was I here? What were my motivating factors? I also thought that the gameplay got repetitive towards the end of the game. That being said, the game has a beautiful madness to it where you felt often out of control of what was happening on screen. It’s bright, bold and very beautiful, it’s unlike anything I have played before and a lot of people will enjoy it. Overall, it is fun and that’s the main thing, it is enjoyable and the gameplay loop will keep you entertained for a while. The problem is, It could have been something truly special but a few things let it down in the end.